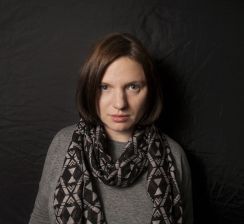 Agata Nowosielska was born in 1982 in Gdynia, Polend. She is a graduate of the Academy of Fine Arts in Gdańsk, where she obtained her diploma in painting in 1993 under the tutelage of professor Teresa Miszkin and professor Jarosław Bauć. She also graduated from Hochschule für Künste Bremen as a student of Yuji Takeoka and she finished Postgraduate Curatorial Studies in the Institute of the History of Art at the Jagiellonian University in 2010. She is       a painter, a curator and the author of critical texts on art. She is also the author of many solo exhibitions (e.g. "Holy place" - in Växjö Konsthall /Sweden; "How I ended up becoming a painter" in Oldenburg /Germany; "W Barok" [Into the Baroque] in Gdańsk City Gallery; "Wczoraj-dziś-jutro"[Yesterday-today-tomorrow] in Colony of Artists in Gdańsk; "Domino"    in Galerie Herold in Bremen)  and group exhibitions (e.g. "From longing to belonging"             - Run Run Shaw Creative Media Centre in Hong Kong; 3rd Painting Biennial "HDLU" in Zagreb; Jeune Creation in Cent Quatre in Paris; "Cudokracja" in Modelarnia [Mock-up room]/ Wyspa Institute of Art in Gdansk). She is the recipient of the scholarship "Bremerkunstipendium" (2007), the Cultural Scholarship of the City of Gdansk (2010 and 2014), the Pomeranian Voivodeship Marshall Scholarship for the Creators of Art (2014) and she is the laureate of the International project "Close Stranger" (conducted in cooperation with "Laznia" Center for Contemporary Art, 2013-2014), as well as the winner of the 2nd prize in the international art contest "Bilder retten Bücher" organized by the Austrian National Library in Vienna. Nowosielska has also received the scholarship of the City of Gdansk "Mobility Fund" in 2014 and the scholarship of Adam Mickiewicz Institute "Polish culture worldwide" twice in 2016. She was the curator of such exhibitions as "Summer of Youth"      at the Zacheta National Gallery of Art in Warsaw (2010) or "Paradise Lost" in Gdansk City Gallery (2012). Her texts were published in e.g. Intertekst, O.pl, Exit, Panoptikum.